Descent is a 3D first person shooter that takes place in the distant future. The PTMC (Post Terran Mining Corporation) owns a lot of mines, spread all over planets in our solar system. Somehow all the mining robots become infected with a computer virus and took the human workers hostage. Your job is to infiltrate the mines, clean out the robots, rescue any hostages you find, and lastly destroy the infected mines by destroying its reactor. You control a small anti-grav vessel called a Pyro-GX, your only hope in this metallic nightmare.

Descent was developed back in 1995 by Parallax Software and published by Interplay. It was a milestone in computer-gaming because it was the first game to truly take advantage of all three dimensions in the virtual space and had enemies that were not simple 2D sprites, as in Doom, but real 3D polygon models.

In 1996 Interplay released the second part of the successful saga. Developed by Parallax again, Descent 2 was one of best games in that year.

This time, your job is it to clean up the PTMC deep space mines outside the solar system. There the player encountered over 30 new, deadly robots in 30 new mines with new textures. The Gameplay was the same as known from Descent because it uses the same engine.

As the game is already a real old-timer, it has – like Descent, too – a huge and strong community full of fans who love the saga and still play it as on the first day.

1997 and 1998 the Source code of Descent and Descent 2 was released by PARALLAX under the flag of a non-commercial Open Source license. As a result, LDescent, D1X (Descent 1 eXtended) and D2X (Descent 2 eXtended) were developed. These initially introduced sound output via SDL, OpenGL rendering, UDP for Multiplayer and many overall improvements to the original games.

However the development of LDescent stopped when D1X came out and D1X itself fell asleep some day and D2X followed later on.

In September 2005 I started the write some small installer scripts for some older Linux binaries of the latest versions of D1X and D2X. Pretty fast I noticed that with the Source I had more possibilities I could ever imagined.

As Linux-user and enthusiast of the Open Source-movement it was only a logical step the provide my work to everyone loving Descent and Descent 2 as much as I do.

I had no experience about programming but I had the “my way or the highway”-attitude. So I learned and in January 2006 I provided my very own binaries of D1X and D2X for Linux and Windows.

While not having it’s own features or improvements, I now had my own ports of the games:

Together they form the DXX-Rebirth project.

As time went by, I worked a lot on DXX-Rebirth and a lot changed. While still maintaining my own Philosophy about the original Feeling of the games, I introduced new features, fixed old glitches and little annoyances and as well cleaned up a lot of the old code. Some helping hands joined the team and enrich DXX-Rebirth with their own skills and ideas.

And this process still goes on…

Software is like a good dish: it needs a good recipe to become tasteful.
So every Software project should have a direction, a target – a philosophy.

DXX-Rebirth should be one thing primarily: Descent and Descent only.

Descent and Descent 2 were great games. There isn’t much space for improvements. Sure you can replace textures with high resolution versions, you can add realtime shadows, bumpmaps and so forth. But in essence Descent is Descent – and that’s my opinion.

DXX-Rebirth is a more conservative Source Port. It’s not a clone, not a remake, not a re-creation or re-imagination – it’s Descent!
As said, Descent is great as it is and when you play DXX-Rebirth you should play Descent and Descent 2. This project should keep the games alive, fix bugs, keep them on par with the current technology and give you a stable and reliable experience.

When you play DXX-Rebirth you should have the same feel you had when you played the games first. This nostalgic flavour you loved so much is what we aim for.

And you – the player – should feel this, too. Remember the feeling you had when you held the Descent box in your hands? The excitement you felt when the Descent 2 installation bar slowly filled your flickering monitor? Try to recall the moment when you first saw the “PREPARE FOR DESCENT” message on your screen. Think about the scary shriek when a Lifter first scratched on your Pyro’s hull. Drift back when you explored the dark caverns of Quartzon.

That’s why we are here for.

These were the good times – the more simple times. And that is what DXX-Rebirth should be, too. You should have fun playing. Playing the games you know and love.

When working on this project, I always try to keep that in mind. Soon as I implement a new feature, I do not only think about the design of the code but also if this feature fits the atmosphere of the games.

So there is a balance you gotta keep and our philosophy cannot always been interpreted as a dogma. Texture filtering, transparency effects or colored lighting are graphical improvements, but they do change and expand the visual representation of the games. So for you they might alter the feel of the games, too. That is why they all are optional.

I do not try to please everyone – it’s impossible. But I try to be diplomatic and I listen to the voice of my self from 1995, playing Descent on a 80486DX2.

Compared to the original games, DXX-Rebirth provides a large set of improvements to enrich your gaming experience.

Here is a small and far-from-complete list of the most important features these Source Port provides: 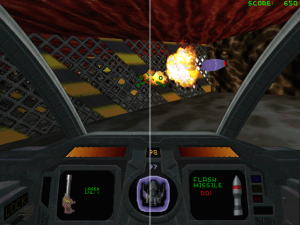